Hit enter to search or ESC to close

Fatbiking in winter is an absolutely fascinating sport. In Alaska and in the Yukon the bikes with the extra wide tires have been around for quite a while. Now this fascination has reached other parts of the world, too. That’s why for some time already I have been toying with the idea to get a special edition MYAU/MLAU Fatbike made. And to learn more about these types of bikes and what specs these need to have to work in the extreme cold.

But it was not until Kevin Turek, who is a MTB expert, contacted me with the same idea that the ball finally got rolling. As luck would have it, with MAXX-Bike we also found the perfect company to execute our plans. They are market leading custom bikes experts already producing Fatbikes and immediately embraced the project. Uwe Matthies, the CEO himself has been a driving force and helped with all aspects involved. The result made us really proud.

Since it has been introduced, MAXX-Bike ambassador Florian Reiterberger and Bernhard Hasenbalg, both from Germany, won their MYAU 300 and MYAU 430 mile races on a special edition Fatbikes made by MAXX-Bike. So, right from the beginning MAXX-Bike got it right!

Before I introduce you in more detail to our MYAU/MLAU Fatbike here are some more general info on biking in the cold.

A bike for winter weather needs to have certain features in order to handle cold, snow, ice and the lack of daylight. This is especially true if we are talking about arctic conditions where having the right equipment may even be a matter of survival. Whilst winter cyclist who travelled from Whitehorse to Dawson in the gold rush era had no choice, nowadays Fatbikes are the way to go. However, for it to do the job you need to do more thing than just having wide tires. We will now discuss a few of the important components for winter fatbiking.

One thing to consider is if you will actually participate in an extreme race like the MYAU/MLAU? Or if you will actually use the bike more in rather “mild” winter weather like we get it in the Alps? And how much elevation will you have to deal with and what will the trail conditions be like?

The choice between IGH or derailleur chain drive depends a lot on the type of trail and the expected level of elevation. The classic derailleur chain drive with presently 1 x 12sp allows for a more sporty gear shifting and is lighter. However, chain, rear derailleur still are plenty of moving parts in charge of transmission – each a potential problem in cold, snow and ice but also other obstacles like mud, sand and bushes.

With an IGH (the one and the only: Rohloff XL 14 gears with special oil mixture) you have no issues with any such obstacles – even more so if you configured a gates belt drive instead of a regular chain. Therefore, this is a great solution for rough conditions and when the additional cost and weight are less of an issue …

Down to – 15° C hydraulic Shimano disc brakes with large discs (200/180 mm) are our recommendation, especially when you also use your Fatbike in warmer weather and need the best possible brake performance. However for much lower temps we recommend mechanical disc brakes. Not the braking fluid as such is the problem but the sealings on levers and calipers which can turn hard and rigid and thus cause leaks in the hydraulic system. The disadvantage of mechanical brakes is of course less braking power. So, it remains a question of individual priorities.

All moving parts and bearings need to be treated with a special lubricant, e.g. SKF LGLT2, which works down to – 50° C; housings and cables should – and all MAXX bikes have this – be applied inside the downtube, with sealed endcaps from Shimano. In addition to that the entire cable routing inside needs to be filled by the same anti-frost lubricant to prevent humidification. Otherwise the wires will freeze in the housings immediately when the bike is exposed to strong temperature changes, especially from indoors to outdoors or sudden overflows crossing frozen rivers. When configurating your fat bike on www.maxx.de/en you can chose the option “Arctic-Setup”. This set-up also works fine in normal temperatures and does not need to be changed when summer comes.

No parts that will need to support weight or have to deal with a lot of forces should be made from plastic, e.g. buckles, holders, brake levers or any attachment parts. Plastic may get brittle and break. Whenever possible use aluminum or stainless steel instead. Please also keep this in mind when choosing any bags or your saddle.

In extreme cold quick releases on hubs and seatpost will not be reliable. They can even break. Therefore, you should opt for traditional Allen key solutions instead.

An essential ingredient of your Fatbike are the tires. Choose the fattest that fits in your frame and fork and go for the most aggressive and deepest pattern. Studs are always very helpful on icy tracks. Be sure that the air pressure is on a minimum to have a better traction in snow tracks.

Without tubes? For sure but…

Riding tubeless on a Fatbike is a must! No ‘snake bites’ and no loss of energy due to the stiff tubes inside. But be sure you have spare tubes and pump in your bags riding on a tubeless wheelset!

Winter also means fewer hours of daylight. That’s why a good source of energy can have a strong impact on how safe you are and how much fun you have riding your Fatbike – especially when you are on an expedition and need a reliable way of charging your batteries for cell phone, head lamp or GPS navigator. Our recommendation is the SON Fatbike hub dynamo along with two connectors – one for the SON Edelux metal headlight/taillight and the other wire connection to the voltage converter/recharger that you wear close to your body.

As long as you are riding at a max 15 km/h and the tire pressure is not too high there should be enough damping not to need suspension fork. If you ride faster or on bumpy tracks consider a suspension fork – Manitou’s Mastadon is the benchmark.

The first MYAU Fatbike being assembled. Here an image from the MAXX-Bike production facility in Rosenheim, Germany: 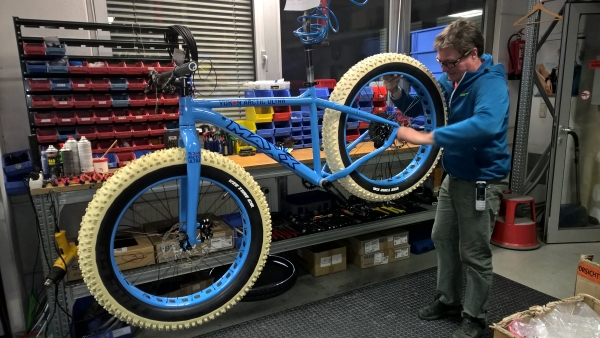 All components in mentioned above are pretty much a “must-have”. For all other parts there are alternatives. This also goes for the frame color. You can also get your bike without MYAU/MLAU-logos and use other logotypes instead and/or get your name on the frame.

There are many options to really make this bike individual for you. If you would like professional help getting your YAU Fatbike, please contact Kevin Turek: Cell +49 (0)177-267 8713 or email YAU-Fatbike@web.de.
Last but not least I’d like to mention that of course anybody can buy an MYAU/MLAU or winter expedition Fatbike with us. You do not need to participate in the race.

Enjoying a Fatbike with a powerful electric support, MAXX has developed the Huraxdax ELS powered by a strong 90 Nm engine and big battery. Even in winter you can ride for hours – of course it is not an option for the our races 😊 or longer expeditions into the backcountry with a chance to recharge the battery.